If you never try it… 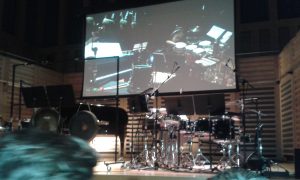 A few days ago I went to a concert. Not a typical one though. I was attracted by the lines “…even if you know nothing at all about…”, and “We know all people will bring intelligent ears with them.” An opportunity to experience something new.

The music was by Karlheinz Stockhausen, a pioneer of electronic music in the 1950s who had a major influence on the world of pop as well as on ‘serious’ music (he is one of the faces on the cover of the Beatles’ Sgt. Pepper album). It was an extraordinary evening.

Some people might not regard what we heard as music at all, but just a jumble of noises. Beforehand, I might have been one of them. What astonished me was that the whole experience was completely enthralling. The sound as you might hear it from loudspeakers at home was only one element. The virtuosic skill of the performers creating this incredibly complex sound was humbling to watch. The continually-changing spatial arrangement of the sound, and the atmosphere created by being with all those other ‘intelligent ears’ added other dimensions. Somehow, the jumble started to make sense. It was an evening to remember for a long time.

Its worth the risk

If you have never tried something, you can’t know what you are missing. Maybe it won’t work for you. But just as likely you will find new perspectives and insights that you could not have imagined otherwise. It is worth the risk.