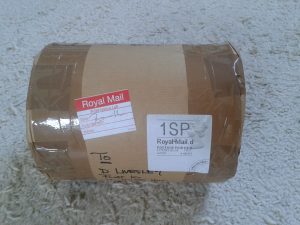 I’ve just come back from the local parcel office with a parcel. Yesterday I had one of those cards through the letterbox that tell you that they had tried to deliver a parcel, and I could collect it from the office.

The thing is, I know that they didn’t try to deliver the parcel. I was in, and the card just came through the letterbox with the other mail. I was next to the front door at the time – no ring, no knock.

Of course I understand that a large proportion of people they have parcels for are out when they call. I can see that they are just trying to make the jobs of the delivery people more efficient. It saves them the effort of carrying all that extra weight and bringing most of it back again. It saves them waiting to see if someone answers. And it saves them having to write out cards on the doorstep, possibly with rain smudging the ink and making the card go soggy.

The thing is though, I have paid to have that parcel delivered. I knew that I was most probably going to be in when the mail came round, so I was happy to take the small risk that I wouldn’t be and that I would have to collect it. I paid them to take the risk that I wouldn’t be in, with its efficiency implications. By writing out the cards without the parcel even leaving the office, they avoided the risk I have paid them to take, and transferred the inefficiency to me. Sadly, it is not just one organisation doing this – I have had similar experiences with other delivery services.

A more honest approach would be to offer two categories of delivery at two different prices: a cheaper service, where you know you will have to collect, and a more expensive one where the attempt to deliver will be made. That way you could price the risk realistically. But providing the cheaper service when the customer has paid for the more expensive one is just wrong. In most industries, you would not get away with it.

I have no doubt that they are all under a lot of competitive pressure. Probably local managers have concluded that it is necessary to do this to meet the tough performance targets which result. If so, that betrays both a cavalier approach, and a lack of joined-up thinking. If you don’t give your customers what they pay for, sooner or later they stop being customers.