Make up your mind! 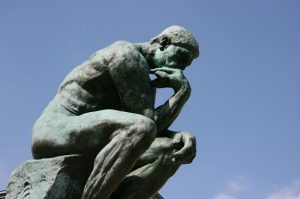 I was once asked in an interview about tough decisions I’ve made, and how I made them. I understand why it might be thought important in the selection process: it seems like a good question. Doesn’t it tell you something about the individual’s ability to cope in difficult situations? However, on reflection I’m less convinced! Thinking back over a number of my roles, I realised (to my surprise) that most of the important decisions I have taken have not seemed tough at all. By ‘tough’ I mean difficult to make; they may still have been hard to implement. Conversely, tough decisions (on that definition) have often not been particularly important.

So what makes a decision tough? Often it is when there are two potentially conflicting drivers for the decision which can’t be measured against each other. Most commonly, it is when my rational, analytical side is pulling me one way – and my emotional, intuitive side is pulling another. Weighing up the pros and cons of different choices is relatively easy when it can be an analytical exercise, but that depends on comparing apples with apples. When two choices are evenly balanced on that basis, your choice will make little difference, so there is no point agonising about it. The problem comes when the rational comparison gives one answer, but intuitively you feel it is wrong. Comparing a rational conclusion with an emotional one is like comparing apples and roses – there is simply no basis for the comparison. When they are in conflict, you must decide (without recourse to analysis or feeling!) whether to back the rational conclusion or the intuitive one. A simple example is selecting candidates for roles. Sometimes a candidate appears to tick all the boxes convincingly, but intuition gives a different answer. On the rare occasions when I have over-ridden my intuition, it has usually turned out to be a mistake. Based on experience, then, I know that I should normally go with intuition, however hard that feels. We are all different though. Perhaps everyone has to find out from their mistakes how to make their own tough decisions. What we should not do is confuse how hard it is to make a decision with how important it is.
Read More >>