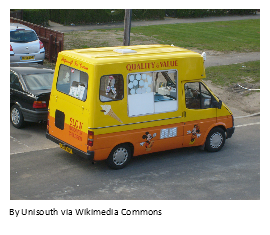 It’s about 5°C outside, and I’ve just heard the chimes of the ice-cream van. Yes, I know its nearly April, and the daffodils are trying to come out, but who would want to put a coat on and go and shiver in the road for five minutes, just to eat something … very cold?

The time is not right

I suppose some people must, or the vendor would not bother to do his rounds, but it made me think how often we all try to ‘sell’ something – a good, a service, or just an idea – when the time is not right. Sometimes it is needs must. I have negotiated the sales of several businesses when the owners' need for cash meant that problems in the business had to be passed on, not fixed first. Not surprisingly, the prices obtained reflected the weak positions of the vendors. Sometimes we may do so not in the expectation of selling anything at the time, but because we need to keep our profile high for when the time is right. There is a local gardening company that has posted cards through my letterbox at least two or three times over the winter, when I’m unlikely to buy. No doubt there is less opportunity cost of distributing leaflets then, and they all contribute to the old marketing rule of seven contacts before people buy. But how often do we fail to even think about the timing when we try to get a boss or colleagues to accept a new idea, and don't realise that the time is not right?  To us it seems so obvious, why would we not want to just get on with it? And sometimes others whose buy-in we need ‘get it’ too. But when the reaction is less than positive, how often are we just trying to sell ice-cream on a cold day?
Read More >>