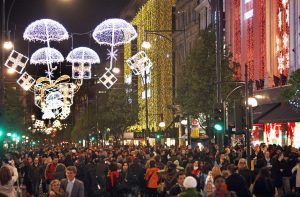 Just before Christmas, I was doing some last-minute shopping in one of the Oxford Street department stores. As usual at that time of year, there was a long queue for the checkouts. When I eventually got to a till, I was surprised to see two people there. There was a young man operating the till. And there was a tall older man bagging the goods sold. Although they were busy, you could tell that they were working well together, and enjoying exchanging a few words with customers and each other when they could.

Despite this, the older man had a gravitas that you associate more with the Board room than with the tills of a busy store. Not surprising really – he was a senior manager doing a shift supporting the front-line staff at their busiest time. What was surprising (apart from him being there at all) was the easy way he appeared to be accepted as part of the team.

Here was a real “one-team” culture in action. He was not just doing what the organisation expected. He was doing what he believed in, and so it came naturally. His colleagues saw it as perfectly natural and normal too. Everyone was comfortable, and it worked.

Culture is the pattern of behaviours that people adopt in order to be accepted in a community. It is defined by what people really value, not what they say they value. In that store, people really valued working together as one team to deliver happy customers. That meant that there was nothing awkward about managers working on the tills. Actions speak louder than words, and clearly it works for them.

That experience prompted me to re-read Carolyn Taylor’s “Walking the Talk”, an excellent introduction to corporate culture. Here was an organisation that has a clearly-defined culture, and knows how to maintain it by walking the talk. Sadly, in my experience most leaders are better at the talking than the walking, and in any case most organisations don’t really know what culture they want (if they think about it at all). That’s a lot of value to be losing.